Airflow puts its files into $AIRFLOW_HOME, so set that or use the default, ~/airflow.

Navigate to localhost:8080 and check the UI

Start by getting rid of the examples and default connections

Reset the database to clear the defaults

Next, we switch to the new UI

Add an admin user to the database

Restart the webserver and have a look at new, shiny UI! localhost:8080

What is a DAG?

A DAG is a Directed Acyclic Graph

Goes in one direction only

An order of operations. First A then B then C

Why does it matter?

No matter where we are in the graph, the orchestrator knows what are the next possible options. 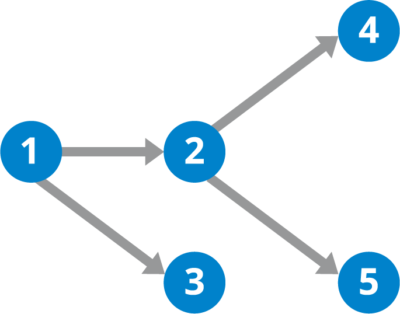 2 and 3 can run in parallel

4 and 5 can't start until 2 has finished

In the Airflow UI, the Dag View looks like this:

DAGs in Airflow are defined by python code

This adds a lot of flexibility when defining DAGs

The DAG contains the tasks needed to fulfill the business logic.

Airflow includes many such tasks - they are called Operators

Dag files are parsed by Airflow every second - don’t have any executing code in here!

Define dependencies between tasks with >> or the .set_upstream()/.set_downstream() method. Generally >> is preferred

Airflow automatically loads all DAGs from the dag folder in $AIRFLOW_HOME.

Make a DAG in the dag folder with the following tasks

Operators in Airflow represent a task that Airflow will run

PythonOperator and BashOperator are two examples of tasks we have already used, but Airflow comes with many operators built in.

This is important for two main reasons

In the account, we can create containers - akin to directories to hold various files.

To be allowed access to the data, we need credentials.

There are a few different ways of being given access to data.

Can be regenerated but can’t set expiration date

Generated using an access key so if the access key is rotated, all SAS tokens generated that way will also expire

A user can also be given access to a storage account through the Active Directory - this could be a Service Principal, your personal login or a ManagedIdentity

These can be managed with the azure-identity python package

Assuming we have a storage account named “myteststorage” with a container named “raw”.

Let’s upload a file named test.csv to the container

In your assigned storage accounts, upload and download a test file

Fsspec is a project started by the Dask people to standardise working on remote filesystems - a core requirement for Dask.

Filesystem Spec (FSSPEC) is a project to unify various projects and classes to work with remote filesystems and file-system-like abstractions using a standard pythonic interface.

In the same venv as before

Read and write directly from pandas

With an fsspec-compatible Filesystem, we can do many of the things we expect from a filesystem.

Notice that we needed access to some sensitive information in order to make the connection to the Storage Blob.

Airflow provides an abstraction, by storing that sensitive connection info encrypted in the metadata database and referring to it in code via the id

In the UI, the admin can add a Connection to any backend - Airflow supports a number out of the box. For each operator we want to use, we generally need to add a connection.

Example - inserting into a database

If we have a postgres database, we can use the PostgresHook to simplify talking to the database.

One of the current issue with Azure Blob Storage SDKs, is that Microsoft recently decided to implement breaking changes to the Blob Storage API.

Downstream, there is still plenty of work left to do to update libraries to work with this breaking change.

Airflow has been focused on the 2.0 release, and still does not support the new API

This will not be an issue, when we switch to Docker images, but know that this can be an issue

Microsoft tried to introduce the WASB protocol, which is the legacy way of interacting with Azure Blob Storage.

We will try them in an exercise, but in general we won't use many operators.

Write a DAG that downloads a month’s worth of data from Inside Airbnb , unzips it and uploads it to your storage account.

Wait for something to happen

A sensor is an operator that runs continously, succeeding only when a condition is met.

These can be used for any task that needs to wait on some external input.

Could be a file landing on a FTP server or some data to land in a database or just wait 10 mins before proceeding.

Airflow is split into 3 main components - 4 if we include the metadata database.

The webserver is a UI on top of the Scheduler API, and also doesn’t actually do any work

The executor is the part that actually does the work - Airflow currently has the following executors:

The SequentialExecutor is the default when running Airflow - it only runs one task at a time and is the most limited executor.

Use for testing, and switch to another in prod

LocalExecutor runs tasks in parallel on the machine - If you have a small airflow installation, with only one machine, this is the option to use

Designed to use for debugging in your IDE, check details of how to use it here

Runs each task using dask.distributed workers. Great if you already have a dask cluster setup

The “old” main way to run Airflow workers. Celery is a python framework to distribute work to various distributed workers and has been in use for a long time. Still works great, but requires dedicated machines.

In general, the preferred approach is to run docker images for each task to the extent that is possible.

It means you don’t have to worry about installing all the airflow dependencies in each worker, and lets you write each task’s logic independently.

These images can run on a Kubernetes Cluster, or managed container runtimes like Azure Container Instances, Amazon ECS or Google Cloud Run.

That way our airflow instance can be a small LocalExecutor and the heavy work is done by a managed service.

Build a docker image to calculate beds per person in the Airbnb Data. We want to calculate this by dividing the accommodates column by the beds column

But how do we get access to configuration from Airflow inside the image?

To use the connections defined in the UI, we can use the BaseHook class

⚠️ Remember, don't write code that runs every time the DAG is parsed!

In addition to connections, we can also use the Variables backend to store configuration. This is simpler to use and can be accessed in jinja templating. 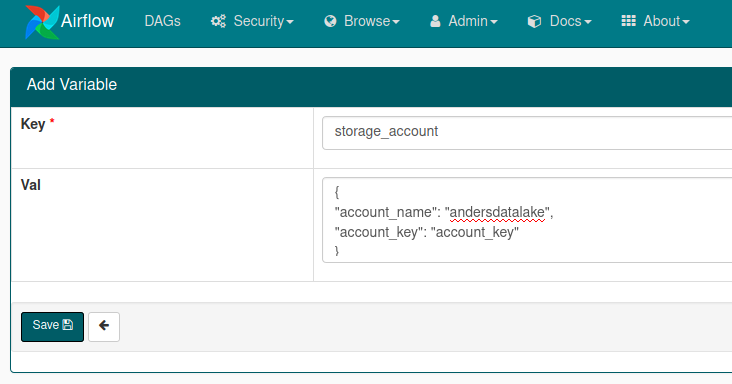 If you have a JSON stored in your variable, Airflow can automatically convert it

We can use Jinja to dynamically generate commands and configuration, such as the environment variables passed to our docker image.

This works, because we’ve built the image locally - we want to be able to access the image from anywhere

We need to push the image to a container registry

Pushing to a registry

We can now push the tagged image

Now we have a private registry set up, Airflow needs a connection to run our DockerOperator

In production, we don’t want to use our local machine to run a container

So far, we’ve been passing secrets as environment variables

This works, but there are alternatives!

Passing secrets to a docker container

There are many ways of passing secrets to a docker container

Environment variables are available to any process running on a machine and are not secure, given that someone can access the machine.

Logging systems can dump the ENVs when logging - 😰

They are, however, great for passing configuration, and a better option than hardcoding secrets

We can mount a file containing our secrets into the container

Inside the container, we can now do

Now an attacker needs access to the running container, not just the docker host

However, now we need a safe place to store the credentials on our machine! 😟

The best option is a secrets Backend, such as Azure Keyvault, AWS Secrets Manager or GCP Secret Manager.

These serve as a secure place to store credentials, where we can grant authenticated access to them.

Backends allow us just-in-time access to secrets, which we can then manage separately from our code

To authenticate, we also need to pip install azure-identity

We need the URL to the keyvault - it’s in the format https://{my_key_vault}.vault.azure.net and would be given to you

In Python, these are represented as credentials in the azure.identity module

The identity module has a ChainedTokenCredential which is a way of specifying “Try these credentials in order”.

DefaultAzureCredentials is a pre-packaged one which tries

This is usually a good default

Looks up environment variables to try to authenticate. Need to set the following:

In Azure, we can assign an identity to a service, such as a VM or webapp.

Whenever possible, this is what we want - no storing of credentials! This doesn’t work for local development though

When we want a user to login, we have a few different options

Open a browser window and allow the user to login via the browser. This is what Office365 uses

Will give the user a code they have to navigate to http://microsoft.com/devicelogin and type in.